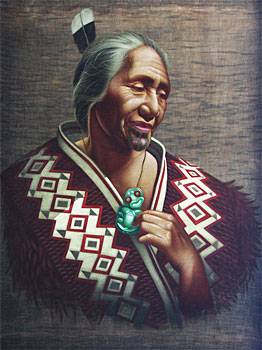 Charles McPhee (1910 - 2002) was one of the original velvet painters. He studied with the founder of this genere of painting, American Edgar Leetag (1904-1954). In the early years, velvet painting was cast as a unique new style that enabled the artist to render life forms into touchable lifelike images that conveyed a sense of being there. McPhee enjoyed immense success from the first days of his debute, he was always one year behind with his portrait schedule. His popularity was such that his exhibitions were always sell outs. McPhee died in Auckland in November 2002 at the age of 92.

A documentary titled 'Velvet Dreams' was directed by award winning Samoan director Sima Urale in 1998. It featured a man so obsessed by a woman seen in a junk shop painting that he traverses the Pacific to find out who she was. The narrator meets velvet artists and collectors in Seattle, Arthur Leeteg's widow in Tahiti, art historians in Auckland and, finally the then 88 year-old velvet painter, adventurer and party boy, Charles McPhee.