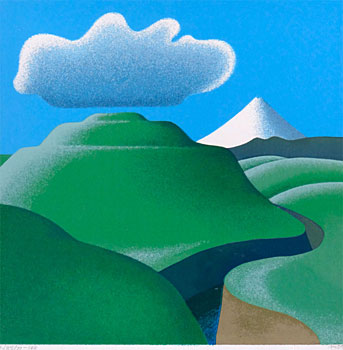 Michael Duncan Smither was born in New Plymouth 1939. He ttended Elam Art School in Auckland 1959 -1960. Returning to New Plymouth he became a founding member of 'Group 60', with Don Driver as his mentor.

Smither produces and exhibits paintings, sculptures and integrates his musical expertise in his art. Living in the Coromandel he travels throughout New Zealand exploring the landscape, the galleries and private collections. In 2004 Smither was awarded CNZM.

In the 1960s Michael began to explore the possibility of making screenprints, having spent his early years witnessing his father, Bill working in that medium. He worked with Bill in his basement studio for the next 15 years making approximately 250 different image screenprints at a time when screenprinting was not considered an "art" medium. Later, at the request of many collectors, he began making signed editions.

These were not individually numbered but included a numbering system that indicated a first edition by the number 1 followed by a date and a catalogue number. This last number was necessary because many prints were of the same topographical feature of Taranaki.

"Michael Smither Painter" by Trish Gribben, published by Ron Sang was published in 2004 and includes extensive images from a lifetime of work.