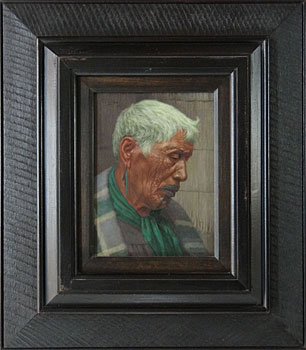 In this reflective portrait of Wiripine Ninia, C F Goldie conveys a mood of transition, not only in the life of the old Chieftainess, but of the times in which they both lived. Wiripine Ninia bears traditional moko and talisman greenstone earrings whilst draped in European clothing, emblems of two worlds. The close and sympathetic bond between artist and subject is evident in this work.