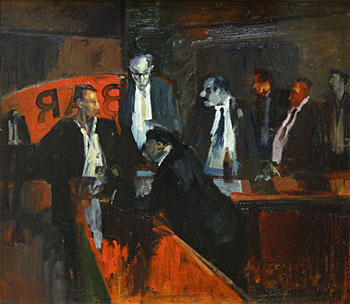 During the years that the family was becoming established, Tapper was laying the foundations for his base; a place from which to develop his art, mature his style, and paint. With authority, he began recording the social history of his era. It had been a slow beginning, for very few works had been completed since returning from England. The genesis was in a large garage behind his home in Kelston, but it is only in retrospect that the extent of the watershed can be gauged. What marked this divide was his series depicting the conviviality of the 'pub': Five O'Clock.

Public bars were male strongholds and the series of paintings relating to this social custom portrayed the chaotic, convivial 'swill' which characterised many New Zealand pubs of the period. Since the First World War all bars closed at 6 pm. Five to six o'clock became an hour of urgency, some would have said a necessity. Six o'clock closing encouraged patrons to consume as much alcohol as they could as quickly as possible. Few amenities were offered, apart from those needed to swallow large quantities of liquor. In 1967 every electorate voted overwhelmingly in a referendum for extended drinking hours to 10 pm.

It is not the pub per se which Tapper paints, but the life within the pub. The people who jostle and lounge, joke and mill around the public bar. This is what attracts him. To him, a pub scene looks beautiful through paint. The tone, colour and drabness offer tremendous scope. It is not a crude drink factory; it is an environment he finds intimate and soothing and a place from which to observe his fellow drinkers. I just want to paint these people at that particular moment in their lives he says.

13. A Lois White Study for Temptation

14. A Lois White Study for Leda and the Swan