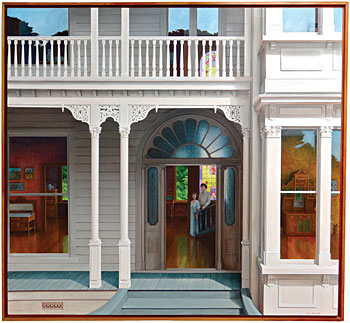 Acquired by present owners directly from the artist

Sir Peter Siddell has long been recognized as one of New Zealand's leading realist artists. Auckland born Siddell was educated at Mount Albert Grammar School and the Auckland College of Education. He began painting professionally in 1972. In 1990 Siddell was made a Companion of the Queen's Service Order and was knighted in 2008, becoming the second only New Zealand artist to receive this honour.

Siddell's realist paintings are identified mainly with depictions of the environs of Auckland. While his works appear to be records of actual places, his paintings have a subjective component, and might be better described as imagined realism rather than truly realistic. The cityscapes and townscapes in Siddell's paintings are rendered empty, sometimes with the suggestion of events occurring outside the picture area. In this sense, his work may be compared to the metaphysical works of Giorgio de Chirico. In 1978, the same year A Portrait of Tony and Patsy was painted, he won the Air New Zealand Travel Award and the Benson & Hedges Supplementary Art Award.

Through the window can be seen a suggestion of a painting by Don Binney, an artist Patsy and Tony admired. I also included my painting, Avril with Kauri Trees, which they already owned. The house is no longer there but Tony and Patsy still own the painting. SIR PETER SIDDELL p. 92 The Art of Peter Siddell, Godwit Publishing 2010

41. Peter Siddell A Portrait of Tony and Patsy