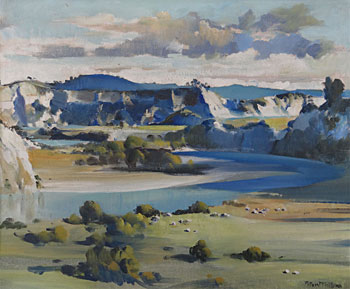 Peter McIntyre loved fly fishing and his frequent sojourns to Lake Taupo meant he often travelled through the central North Island, past the spectacular white cliffs and curving riverbed of the Rangitikei River. The area fascinated McIntyre. So much so, that the cliffs have become one of his most sought after and enduring subjects. In this work McIntyre captures the landscape through broad, confident paint strokes. A similar painting to this featured in a 1998 stamp issue.

41. Peter Siddell A Portrait of Tony and Patsy