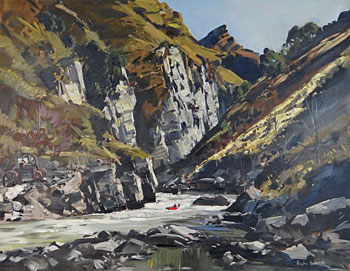 Born in Balclutha 1922 Douglas Badcock had a highly successful professional art career. Preferring to paint en plein-air, mostly in oil, Douglas earned a reputation as one of New Zealand's leading landscape painters. His paintings are included in the Queen of England's collection and King of Thailand's collection. Douglas was a Kelliher Art Award winner and several books have been published on his work. He came second in the 1959 Kelliher Art Award and third in the 1962 award.

Badcock held his first exhibition in Wellington in 1960, selling out within two days. A review at the time described him as 'a realistic painter and absolutely sincere with a natural talent and a high technical standard ... A master of the New Zealand landscape, he paints New Zealand as he sees it'.

Badcock produced at least three publications: My Kind Of Country then later My Kind of Painting and A Painter in Fiji.

In a Listener article in 2004, Mr Badcock said: I paint seas, skies, mountains. I paint the world I know, as it appears to me. I have an image that is there and I have to record it. When I'm painting I let the subject reveal itself. Picasso said I don't seek, I find. And finding is a revelation - intellectually, emotionally, spiritually. The primary motivation is self-expression, but if there's no vision, if we don't see beauty in nature any more, then we're nowhere. Badcock died in 2009.

78. Douglas Badcock Above the Rapids