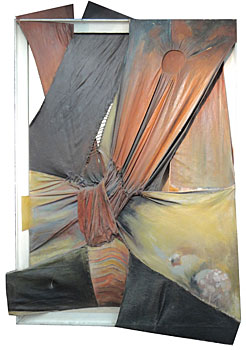 Ted Bullmore's story reads like the stuff of folklore and yet his place in popular accounts of New Zealand's 20th century art history is somewhat obscure. He grew up in rural Southland; was a notable rugby player; is one of New Zealand's earliest surrealist artists; gained significant recognition in the art scene of 1960s London alongside his better-known peers Pat Hanly and Ralph Hotere; and his work was collected by none other than film auteur Stanley Kubrick, with two of the shaped canvases turning up in the director's notorious 1971 movie "A Clockwork Orange". Attending the Canterbury School of Fine Arts during the early 1950s, Bullmore was studying alongside other mid-century modernists including Bill Culbert, Pat Hanly, Gil Hanly, Quentin MacFarlane and Trevor Moffitt. From there it was Auckland Teachers' College and teaching in Tauranga for a few years before moving to Florence in 1959; and six months later London. For a decade it was in the highly charged avant-garde atmosphere of London that Bullmore's career took off; and it was here too that the shaped canvasses emerged.

Hikurangi No.5 is an excellent example of his highly innovative London phase. The work's title reveals his abiding connection to New Zealand as home; for of course the "Hikorangi" series references the sacred mountain of Ngāti Porou; the first place to see the sun on mainland New Zealand; the first piece of land to be fished out of the sea by Māui with its peak the final resting place of Māui's canoe, "Nukutaimemeha". Yet the vigorous abstract assemblage form of Hikurangi No.5 also forcibly demonstrates how readily, in just a few short years, he had leapt well beyond New Zealand artistically. Along with his creative advances in Europe, came recognition. Perhaps the high point was being included in the revolutionary 1967 show "The Enchanted Domain: Surrealist Art" in Exeter, where his work was shown alongside Picasso, Miro and Dali. But two years later he returned to teach at Rotorua Boys' High; and his last exhibition, just weeks before his untimely death in 1978 was at Barry Lett Gallery in Auckland.

Perhaps the quiet legacy of New Zealand's unsung surrealist extends all the way to Julian Dashper's deconstructed canvasses in the 1990s. When he layered naked picture frames in "Chain Frame"; or laid canvas strips behind empty frames in "Here I was Given", Bullmore had already trod a similar path.