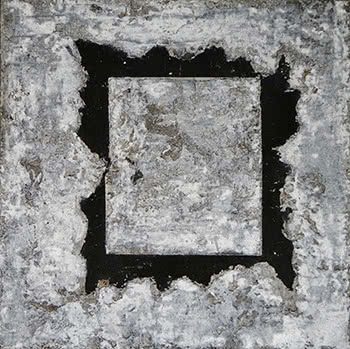 Jose Maria Sicilia was born in Madrid and grew up under the Franco dictatorship. He spent his holidays in the monastery town of Escorial near the Sierra de Guadarrama. In 1975 he joined the School of Fine Arts of San Fernando in Madrid. In 1980 the artist moved to Paris, where he first exhibited, and in 1985 relocated to New York, where he became a close friend of composer John Cage. At this time, his early work displayed an expressionist tendency.

During the 1980s he was hailed as one of the most prestigious young Spanish artists. He is known for his paintings of nature with subjects including landscapes, insects and flowers. Sicilia has spent considerable time travelling in Tangiers, Syria, Egypt, Morocco and India and his work is inspired by these sojourns. He is renowned for his unusual techniques such as the use of wax with lithography.

When reviewing an exhibition at the Queens Museum of Art, NYC, the New York Times referred to Jose Maria Sicilia's paintings as ... refined and very seductive. His waxen surfaces create delicate plays of light and shadow. Objects appear like auras or after-images through translucent veneers. Sicilia's work has been exhibited at Musee d'Art Contemporain, Bordeaux, 2000 Musee des Beaux-Arts, Caen 2000, Venice Biennale (1986), Centro Atlantico de Arte Moderno, Gran Canaria and Mohamed Mahmoud Khalil Museum, Cairo, Egypt. He has held multiple exhibitions in Japan, first in 1988 at galleries in Nagasaki, Kyoto, Tokyo and most recently in Fukushima, in the wake of the 2011 tsunami and earthquake in the area. In 1989 Sicilia received the Premio Nacional de Artes Plásticas of the Spanish Ministry of Culture.