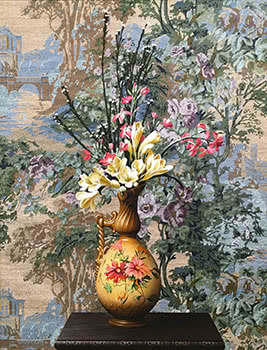 I Remember references the artist's mother in which Alvin stated at the time: A flower painting done for my mother who is in hospital and has been there for the last five years. She can no longer hear, see or speak

Alvin Pankhurst revives nostelgia yet paints unsentimental reminders of times past. His old master paintings give a new meaning to technical skill in this era of speed. His paintings of the over-elaborate details of Victoriana are modern day vanitas, for there is the same pronkstilleven (a Dutch term meaning ostentatious display) of still lifes in which objects were used to symbolise death and the transience and the vanity of earthly achievements and pleasures.

When presented with a Pankhurst vanitas we read it in much the same way as the Dutch burghers read their Bibles, searching for confirmation of forgiveness, and we read into the Pankhurst painting what is not there. It becomes a visual documentation of objects half-remembered in a stultifying memory sequence - a surreal/unreal consciousness of the passing of time.

83. Allen Maddox Behind the Bridge of the Nose VII