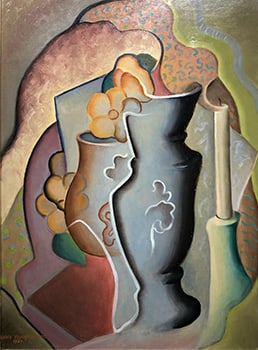 Described by some as a New Zealand surrealist, Adele Younghusband was a highly spiritual woman who painted one mural for Hamilton's Anglican Chapel of St Anne, another for the Theosophical Society Building, and a much-loved depiction of Tane, God of the Forests for Mahinerangi at Turangawaewae in Ngāruawāhia.

Her mother's family came from Great Barrier Island - a sister was botanical artist Fanny Osborne - but Adela Mary Roche was born at Ngaroto in the Waikato where Hungerford Roche (1841-1914), her Dublin-born father, was the first Pākehā to farm. Learning her trade of photographic retouching from pictorialist Harry Gaze (1874-1953) in Hamilton, she studied painting with Horace Moore-Jones (1868-1922) before marrying Gisborne grocer Frank Younghusband in 1905 and bearing him three children.

Unmistakeably modern in her outlook, she divorced her husband in 1917 and moved to Whangārei to open her own photographic business, becoming famous there as the first woman to bob her hair. Daughter Joyce's death precipitated a move to Dargaville in 1927, but by 1930 she had returned to city life, opening a photographic studio in Devonport before returning to Hamilton in 1934 where she set up the Waikato Society of Arts. After studying with George Bell in Melbourne in 1937, she exhibited her paintings and prints there and in Sydney before returning to New Zealand.

Other Adele Younghusband works are held by the Auckland Art Gallery, Te Papa, the National Gallery of Australia, Art Gallery of New South Wales, Rotorua Museum of Art and History, Auckland War Memorial Museum, the Dowse and the Manawatu Art Gallery, with the largest collection of works being the gift she made to the Whangarei Art Museum in 1964, five years before her death.