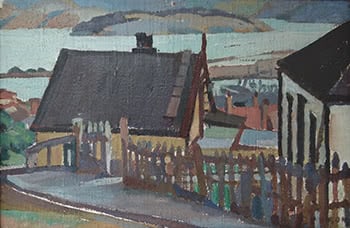 Old Houses Lyttelton or Quail Island Lyttelton Harbour is signed E Polson confirming this as an early work by Evelyn Page circa 1936. From 1930 until 1936 Eve Polson taught art at Craighead in South Canterbury.

During 1936 her first solo exhibition was held at the Durham Street Gallery, Canterbury Society of Arts. The exhibition was a great success with every work selling at the opening. Polson made the grand sum of £300, at the time this was more than her annual salary, enabling her to travel to the United Kingdom in January 1937 where she met Frederick Page. The coupled married the following year at Governors Bay, Christchurch. This painting was shown in her solo exhibition at the Canterbury Society of Arts held 14th December 1936.