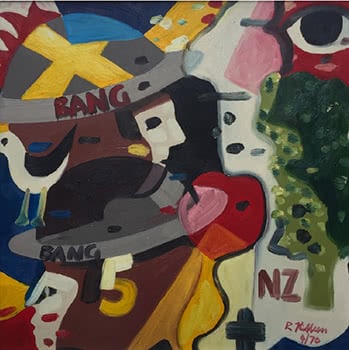 Exhibited at the artist's first solo exhibition at Barry Lett Galleries in Auckland in 1970, this important work marks the beginning of Killeen's shift away from realism towards abstraction. It contains a coded anti-war message, camouflaged by passages of bright dissociated colour. At left are two steel-helmeted soldiers in parallel positions: one faces right in profile heading into the picture, while the other exits left. A yellow cross like a gravestone marker is emblazoned on the top of the advancing helmet, while the number 5 to denote the five senses of sight, hearing, touch, smell and taste mark the humanity of departing figure. Written in capitals on their helmet rims the word "Bang" repeats, giving the work its title, a small acknowledgement of both the popular Nancy Sinatra song of 1965, Pop Art and his teacher McCahon, who introduced text into his religious images in the 1950s.

A seagull, beak cropped out of the picture by the frame, separates the soldiers' heads. A dark cross placed at the bottom of the painting marks a division between them and the outlined profile with green foliage inside its silhouette. This dreamy and remote head is branded with the abbreviation for this country, NZ. The patches and splashes of red paint connote fire and spilled blood, with a pierced heart painted just below the centre of the composition.

The loss of life and atrocities committed in the Vietnam War cast a spectre over the lives of many of Richard Killeen's generation. The New Zealand government's 1951 commitment to ANZUS to "act to meet the common danger" meant that between 1963 and the fall of Saigon in April 1975, more than 3000 New Zealand military and civilian personnel served in Vietnam. Wary of the military draft for young men which Australia had introduced, the 24-year-old Richard Killeen wrote in his green notebook, "I will not serve/I will not fight" echoing the words of Irish author James Joyce, in his novel Portrait of the Artist as a Young Man published during World War I in 1916. Killeen's painting, completed during April of 1970, a month marked by the pubic and religious commemoration of sacrifices made on both Easter and Anzac Day, is a highly significant work which sums up the artist's resistance to what he saw as the unholy alliance of nationalism, church and state in the cause of militarism.