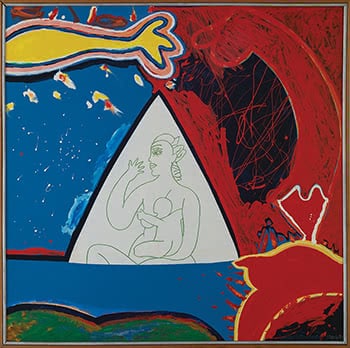 Born in Palmerston North, Hanly completed his Diploma in painting at the School of Fine Arts at the University of Canterbury in 1952 before escaping provincialism for the bright lights of London. There he had the opportunity to work in clubs in Soho where he honed his figure drawing skills, and enrol in classes at the Chelsea School of Art at a time when the impact of American experiments with Abstract Expressionism were being felt. Returning to Auckland in 1962, he developed a characteristic style of Pacific- inflected painting using bright primary colours and bold expressionist gestures.

Hanly and his photographer wife Gil were both driven by their social consciences to campaign against the Springbok tour in 1981 and were prominent peace activists. They often brought their politics into the creation of their art. Keen sailors, they set out on the Waitematā as part of the flotilla of boats protesting against the visit of the American nuclear-powered cruisers and submarines in the 1970s and 1980s.

The triangular shape at the centre of this composition is a sail containing a drawing of a naked mother and her suckling baby, emblematic of vulnerability needing protection, but also recalling the pyramidal construction of Italian Renaissance depictions of the Madonna and Child. Dark reds and blacks menace the harmony within the white triangle, representing the sacred vessel under attack referred to by the work's title. Hope is offered by the yellow arm of salvation reaching across from the left to push back against the dark forces in a composition inspired by the close connection the Hanlys had with a shocking tragedy.

On the night of 10 July 1985, Gil Hanly had been on board Greenpeace's boat as it lay moored at Marsden Wharf in Auckland, meeting with the Portuguese- Dutch photographer Fernando Pereira (1950-1985). Hours later he was dead, killed by the bombs planted by French secret service agents to thwart the vessel's interference in the French government's nuclear testing on Mururoa Atoll in the Pacific. Named The Rainbow Warrior after the North American Cree prophecy when the world is sick and dying, the people will rise up like Warriors of the Rainbow, ironically the bow of this boat bore a painted dove of peace carrying an olive branch.

Pat Hanly was outraged by what he viewed as a government-sanctioned act of terrorism, and he painted a series of works to convey his feelings. Using stencils and enamel paint, he flicked, splattered and poured his medium onto a flat board, relishing the chance effects caused by using cans with holes drilled in the bottom and the way its liquidity conveyed his energy. A Hanly retrospective was being nationally by Manawatu Art Gallery at the time, and the artist added in these works for the Fisher Gallery, Pakuranga, iteration of the exhibition in 1987. The next year Hanly exhibited the important new series with his dealer Rodney Kirk Smith in Victoria Street. Here, it was this painting which was identified by critic Terry McNamara as the outstanding piece. The whole work sings he wrote in the New Zealand Herald (28 July 1988). It is indeed a powerfully-conceived perfect square of Hanly at the peak of his powers. LINDA TYLER