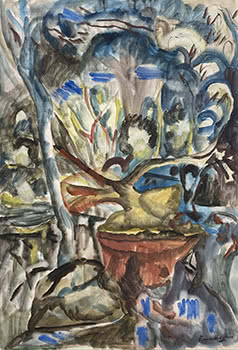 Frances Hodgkins was first introduced to Geoffrey Gorer in 1927 at a party thrown by Cedric Morris and Arthur Lett Haines in London. Gorer went on to introduce her to the rest of his family, and his mother Rée and Hodgkins became very close friends. For the rest of her life, The Elms, the Gorer family home in Highgate, and the cottage Geoffrey acquired in Bradford-on-Tone in 1930 became two places that provided Hodgkins with sustenance, warmth, creative stimulation, and care in times of need.

It was the Croft, however, that had the greater influence on her painting. Situated just outside the village of Bradford-on-Tone on the road to Oake village, the cottage was cared for by Mrs Annie Coggan, who also cooked and cleaned when people were staying at the Croft. Her delicious food delighted Hodgkins, but she also loved her company, as well as the comforting presence of her young daughter Nancy. Mrs Coggan recalled in the 1950s that Nancy would be sent to sleep at the Croft overnight to keep Hodgkins company. Annie was the glowing subject of the two versions of Farmer's Daughter painted around 1931-2. She recalled in a letter to Eric McCormick in 1966 that Hodgkins had been nervous of the cows grazing in the meadows, so that when time allowed, she would accompany Hodgkins with a picnic lunch, enjoying her witty company. Gradually they built up a deep friendship.

This awkwardness around farm animals may have influenced Hodgkins' choice of the riverbank as a favoured place for painting. Running along the side of river from the village carpark is a straight dirt path that is part of the West Deane Way. The field on its left was high with wheat in the spring and summer, whereas in winter the short stubble would have provided little shelter from the wind. Breaks in the underbrush on the riverbank allow views of the water and gave glimpses of the farm on the opposite riverbank, beside which flows a broad weir beside a rough-cut timber barn. Hodgkins painted the weir on several occasions, fascinated by the rapid pace of the water, and the challenge of capturing its constant sparkling movement.

However it was the tangle of willows, cow parsley and weeds on the riverbank that set her a greater challenge. Early on in her English career she had grumbled about the masses of pale greens in an English spring, preferring to capture the sculptural forms of twisted trunks and bare branches of trees stripped bare in the wintertime. And it was these that informed a series of watercolours painted at Bradford-on-Tone over several years in the 1930s, fascinating not least because Hodgkins had to clamber down among the stones, tree roots and branches to do so. But her work after the mid-1930s also respond to the challenge laid down in 1935 by Ben Nicholson and Barbara Hepworth in regard to the 7 & 5 Society to reject figurative subject matter and work in the abstract. While John Piper and Hodgkins both rejected this approach, there is no doubt that a certain degree of abstraction, not least in her arrangement of motifs, began to appear in her work.

In her riverbank works, including Bradford-on-Tone, one must spend time in contemplation studying their composition to be rewarded by a gradual understanding of her approach to her subject. The tall tree trunk on the left rises among clumps of rock, while another centrally placed forked trunk in soft yellow ochre is reminiscent of the vases used in her still life/landscape paintings of the early 1930s. The blue water, its movement in places defined by series of blue parallel brushstrokes, evoke its eddying among tree roots in the foreground, before wending its way across the upper reaches, while a broader blue area to the right suggests the broader water beyond the banks. Masses to the left suggest clumps of weeds among the rocks. Light filters through the landscape - brighter green strokes, highlighted by dashes of yellow and red ochre, suggest sunlight glancing across shrubbery. The overall composition is somehow reminiscent of a 'bouquet', with plant elements taking the place of cut flowers. MARY KISLER

More about Rebecca West: In the 1930s and 40s, many eminent British writers, artists, musicians, philosophers, politicians, and art collectors acquired the works of Frances Hodgkins. Rebecca West was almost as famous for her long affair with fellow writer H G Wells as her left-wing feminist beliefs and her prodigious literary output. She almost certainly bought Bradford on Tone at Hodgkins' late 1937 exhibition at the Lefevre Galleries, London, but she had also had the opportunity to meet Hodgkins several years earlier. Hodgkins replied to an invitation to meet West in February 1934 at the home of Lefevre dealer Duncan Macdonald, 'It sounds most terribly attractive meeting Rebecca West at your Flat at luncheon - but I simply cannot promise to coming feeling as I do at my very lowest ebb of intelligence…'. It is tempting to think that despite feeling exhausted, having just finished a tranche of canvases for her next exhibition, Hodgkins succumbed at the thought of a good meal and lively conversation. The other possibility is that Rebecca West was encouraged to acquire Bradford-on-Tone by Katherine Church, who had met Hodgkins in 1936 at the Lefevre Gallery, the year she married Rebecca West's son Anthony. Hodgkins wrote to her brother William at the outbreak of WWII; '…spent a few days in lovely weather with the Anthony Wests in Wiltshire. He is one of the numerous offspring of H G Wells, parentally acknowledged his Mother is Rebecca West. He inherits the literary gift of both parents - a formidable heritage - but he is equal to it & is making a reputation. Very happily married to a young heiress to Lyles' sugar wealth…' Kitty and Frances remained close friends until Hodgkins' death in 1947, the older artist spending painting holidays at Quarry Farm in Wiltshire. Among the works produced from these visits includes the famous double portrait of Anthony and Kitty West now in the Te Papa collection. MARY KISLER