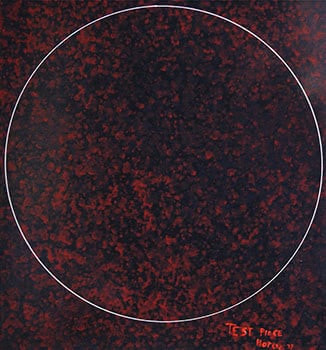 Test Piece relates to Hotere's largest work, Godwit/Kuaka - an 18-metre long mural commissioned for the Arrivals Hall of the Jean Batten Terminal building at Auckland International Airport. The artist chose the painting's theme to be a welcome to returning citizens and a greeting to visitors arriving at Aotearoa's busiest airport. The artist wanted his painting to evoke non- stop, long-distance air travel.

Originally titled The Flight of the Godwit, Hotere's mural remained in the welcoming area until 1996, when redevelopment of the terminal building began. The mural was removed from the airport's art collection, purchased by the Chartwell Trust and lent to Auckland Art Gallery Toi o Tāmaki in 1996. At that time, Ralph Hotere renamed the mural Godwit/Kuaka. The kūaka (bar- tailed godwit, Limosa lapponica baueri) is a shore bird whose flight endurance is unparalleled.

Renowned for undertaking transoceanic aerial journeys between Alaska and New Zealand, it has the reputation of a 'can do and go anywhere' animal. Its physical stamina is legendary; travelling non-stop over 10,000 kilometres across the Pacific Ocean. It starts and ends its journey without once receiving the nourishment of food.

The artist's father, Tangirau Hotere, taught his son the ancient Maori chant stencilled at the mural's centre. Shortly prior to the artist's death in 2013, he recorded part of the Muriwhenua chanting for installation of Godwit/ Kuaka.