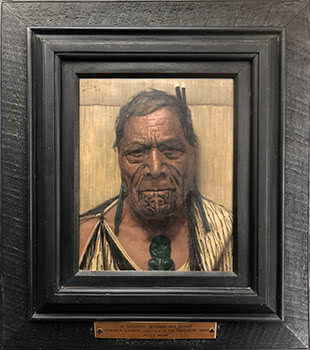 Hori Pokai lived beside the Kauaeranga Stream in the Thames district. His father, Tauri Netana, escaped from Hongi Hika's attack on Te Totara Pa in 1821. He was later captured by a Ngapuhi raiding party and taken to the Bay of Islands, where Pokai was born, instead of his native Arawa.

Although Hori Pokai's tattoo was incomplete, he was considered to be the last tattooed Maori in the Thames district. When Mr W Hammond came to photograph the chief, he painted Pokai's tattoo with Indian ink to ensure that the finer lines would show up more clearly. Pokai was so pleased with Hammond's artwork that he paraded daily down the main street of Thames until the ink finally wore off. Pokai was an avid story teller and would relate how, on several occasions his love affairs brought him close to death. He told of the time he paid too much attention to another man's wife and the aggrieved husband challenged him to a fight. The whole tribe assembled to watch Pokai's punishment. Pokai, as the offender, had to rest on one knee, with a sharp stick in his hand, and defend himself against his opponent, who was armed with a long spear.

The offended husband was allowed to make two thrusts at Pokai, in an attempt to impale him. Pokai parried the first attack and deftly brushed aside the second. He was a man of great pride, with a keen sense of humour. His physical strength is clearly mirrored in his face, particularly the set of his jaw. He was an able warrior and leader, but few stories of his battles have survived.

Goldie first painted Hori in 1905, after a visit to Thames. He took a series of photographs at the time, and these were used for portraits in 1917 and 1919 and for several in the 1930's. The 1936 portrait Pokai Perturbed or Suspicion was submitted to the Royal Academy, and the 1937 study A Midsummer's Day, Maoriland was exhibited at the Paris Salon in 1938. Goldie also had access to the photographs of Hori Pokai taken by Hammond.

Through his lifetime and legacy, Charles Frederick Goldie greatly influenced our nation's artistic and cultural consciousness. Born in Auckland on 20 October 1870, one of eight children from the marriage of Maria Partington and David Goldie, he was named after his maternal grandfather, Charles Frederick Partington, builder of the landmark Auckland windmill.

In 1883 the young Goldie was enrolled at Auckland Grammar School. His youthful artistic talents shone, and it was not long before he was winning prizes at the Auckland Society of Arts. On leaving school, Louis John Steele became his mentor and tutor. Two of the young artist's still life paintings so impressed Sir George Grey, that he convinced David Goldie to allow his 22 year old son to attend the Académie Julian in Paris. Goldie spent over four years at the Académie Julian tutored by leading lights of the Paris Salon such as William-Adolphe Bouguereau. In 1898, fully informed in the French academic style, the artist returned to New Zealand and began collaborating with his former tutor Louis John Steele. The two worked on a number of paintings including The Arrival of the Maoris in New Zealand, a large scale history painting after Gericault's Raft of the Medusa. Before long, however, the relationship deteriorated likely caused by tensions around the former student's growing success. Goldie went on to open his own studio and establish himself as a successful portraitist of Maori.

A visit to Rotorua in 1901 was the first of several field trips during which the artist was introduced to local Maori and persuaded them to sit for portraits. Goldie's works from this point forward strongly reflect the European tradition in which he was trained, and possess a stunning power and visual clarity. On the one hand, his remarkable dedication to realism belies an ethnographic interest. At the same time, he was also striving to capture the mana of his sitters who included chiefs, tohunga and kaumatua.

Goldie formed long-standing relationships with several Maori he met and painted around this period, including Wiremu Patara Te Tuhi and Te Aho-o-te- rangi Wharepu (Ngati Mahuta), Ina te Papatahi (Nga Puhi), and Wharekauri Tahuna (Ngati Manawa). Over the next two decades, Goldie gained national and international acclaim and steady demand formed a strong market for his portraits, a number of which would later be exhibited at the Royal Academy of Arts in London and the Paris Salon throughout the 1930s.

In 1920 the artist moved to Sydney, where despite original plans to continue on to Paris, he was married, at age fifty to thirty five year old Olive Cooper. Marriage in Sydney circumvented the Goldie family disapproval of the relationship between Auckland's famous artist and the milliner from Karangahape Road. After two years in Sydney, apparently disillusioned with his work at this time and suffering from health problems Charles and Olive returned to New Zealand.

Goldie's return to Auckland in 1924, ultimately represented a moment of artistic reckoning. Goldie received encouragement to resume painting from Governor General Lord Bledisloe. Devoting himself once again to his work, he began to apply a more liberal, impressionistic approach to the realisation of his portraits and repainted a number of his former subjects. Works from this later period are distinguished by their soft luminescence, offering a rhythmic departure and disconnection from the rigours of formalism to which he had so strictly adhered in the past. Goldie died in Auckland in 1947, his exquisite, spiritually-charged, often unsettling and ever powerful portraits of Maori having made an unsurpassed contribution to the history of art in New Zealand.