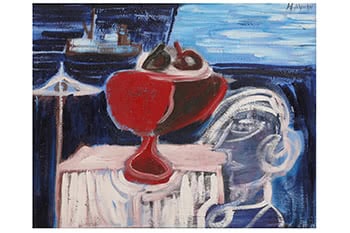 Born in London in 1915, Hayman spent his formative years in New Zealand. He attended Dunedin School of Art and was fortunate to have as his tutor, the talented young British artist, R.N. Field. Field, the first President of the Otago Art Society, had been brought to New Zealand in 1925 under the La Trobe Scheme. Along with Hayman, fellow pupils included Doris Lusk, Tosswill Woollaston and Colin McCahon. Hayman was part of this group of young artists destined to revitalise New Zealand art. McCahon stayed in contact with Hayman and both artists used texts as an integral part of their work.

Returning to England in 1947, Hayman lived in a small cottage in Cornwall. In 1949, he met Barbara Judson, his life-long partner. They moved to Carabis Bay of which Hayman wrote; The dark pine trees, the azure sea, the hills and wide expanse of ocean reminded me of a miniature New Zealand.

Hayman became part of a the St Ives artists' colony, and in 1952 the sculptor Barbara Hepworth wrote to Hayman; There are so many of your paintings that I would love to have. A daughter, Christina Conrad had been born in New Zealand in 1942. Also an artist, her paintings and clay icons were created without initial knowledge of her real father. Nevertheless, in many ways they bear a striking resemblance to some of her father's work. Conrad is well known in New Zealand, Australia and the United States. Father and daughter were to meet years later in London.

Based in London during the 1960s, Hayman taught at the Croydon School of Art. Solo exhibitions were held in Cornwall, London and abroad. 1990 saw major retrospective at Camden Arts Centre. Hayman's work is held in the Arts Council Collection and the Tate Gallery.