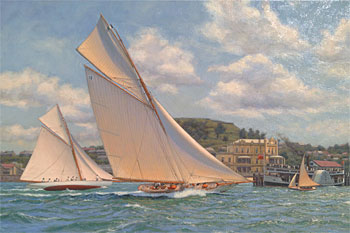 This painting depicts the race, not long after the start, with Thelma number 13 and Ariki number 3 tacking past the recently built Esplanade Hotel and the Devonport wharf. A paddlewheel steam-powered ferry, conveying enthusiastic spectators, is just leaving the wharf to follow the racing yachts. Yacht racing was an immensely popular spectator sport in 1907 with many bets placed on the outcome of the race. A small open boat sails between the two racing yachts.

Thelma's bow is lifting out of a wave, causing the jackyard topsail to luff. Her mainsheet has been eased slightly to drive her through the short choppy waves. Both yachts are wearing the numbers assigned to them for the Regatta. The 'A' numbering system did not exist until 1922 when Thelma's permanent number became A2 and Ariki's A3. Ariki's crew are preparing to tack just to windward of Thelma. Thelma, in a very closely fought battle with Ariki, led the first class fleet from the start to the finish of the race. Both yachts were designed by Arch Logan. Thelma, 59ft was launched in 1897 and Ariki at 54ft in 1904. Thelma was brought back to New Zealand from St Tropez by the Classic Yacht Charitable Trust and restored in 2007.