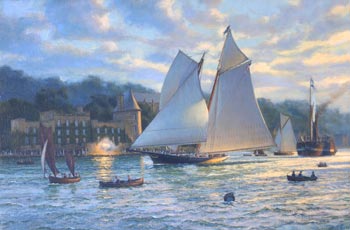 The America crosses the finish line first, to win the One Hundred Guineas Cup, which became international sports oldest trophy, the America's Cup

To the sound and sight of cannon fire the schooner America crosses the finish line off the Castle, Cowes, Isle of Wight at 8.3 pm, August 22nd, 1851. America is surrounded by spectator yachts, rowing dinghies and an excursion paddle steamer, venting steam from it's boiler in celebration of America's victory over the competing fleet of British yachts. The second yacht to finish, the Aurora did not finish until 8.45pm

The shoreline surrounding The Castle is crowded by spectators, eager to see the America finish and also to watch the fireworks scheduled for 9pm that evening. A shaft of sunlight pierces the clouds and illuminates the America as she sails slowly across the finish line, against the outgoing tide. With her raking masts America needs booms to hold the job and foresail out in the light following the wind

The One Hundred Guinea Cup was renamed the America's Cup after this famous victory by America. The Americas Cup is international sport's oldest trophy and the yachting world's most prestigious trophy to win.