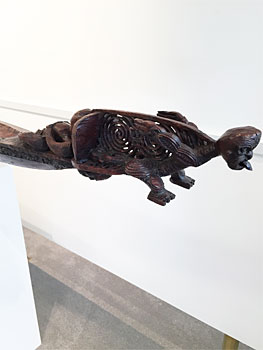 New Zealand carver Ian McMillan (b.1965) creates a perfect scale replica of the mighty Waka, or Maori war canoe. Over the past ten years the Auckland based carver has created a collection of works based upon the mythology of the Maori. In particular the creation mythology of the the Waka. Jarrah, prized as a carving timber is hardwearing, pest resistance and possessed of properties which allow him to remain true to traditional hand carving techniques.

The Waka tauna were the largest, most intricately carved and adorned vessels. Reaching a length of up to 40 metres they accommodated between 80 to100 warriors. Reference to these sea going craft are found as early as 1642 in Abel Tasman's account relating to an attack upon one of his ships' boats in Golden Bay. Sydney Parkinson, an artist on Captain James Cook's first voyage to New Zealand in 1769, and the German scientist Johann Reinhold Forster, who sailed with Cook in 1773, describe Waka.

Ian McMillan's waka relates to the classical period (1500 to 1770) and the Taranaki region. The carved figurehead of the prow (tauihu) is a masterpiece of perforated, spiral carving. The two spirals represent sky and earth. Creation/birth is represented by Papauanuku, the earth mother nestled behind the the tauihu at the prow of the waka while Ranginui, the sky father is seated at the stern. These two figures are united by the rib of life (running along the side the waka) composed of individually carved Taniwha, some with paua shell adornments.

A replica of the size and graceful lines of the mighty Waka, with its portrayal of Maori mythology through intricate spiritual carvings. It is depicting, Creation on the prow, the two spirals, sky and earth are being separated by the Kauri tree allowing light and life to take hold, through to man's transition to the spirit world after death as seen on the stern.