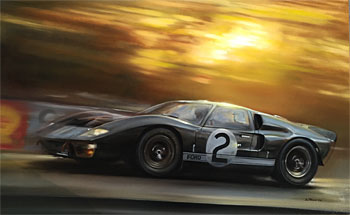 On the last lap, within sight of the finish, Ken Miles No.1 Ford GT40 Mk.ll, leading at the time, suddenly backed off the gas and McLaren in the No. 2 car went a length ahead as they crossed the finish line. Although Miles had slowed his pace to allow this photo finish to happen, it was ruled that McLaren's Mk II should get credited with the win, because his car-having started several positions behind Miles' Ford-had traveled a greater distance (estimated by the ACO to be eight meters) in the 24-hour race, it remains the closes finish in history.

Bruce and Chris covered 3,009 miles at the average speed of 125.4mph, some 4mph faster than the previous record. Bruce said: "We didn't race the hell out of the car at any stage."