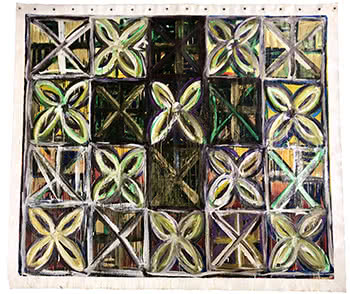 PROVENANCE
Collection of the artist

This work comprises a grid of 20 square alternating bold frangipani flowers and X-like formations. The composition is partly informed by the Samoan tradition of siapo - a practice based on geometrical precision and repetition. It has a sense of expressionistic unruliness through loose brushwork and drips of paint. The palette functions in a similar way: foundational colours are restrained and earth-like, indicative of traditional tapa practice, and overlaid with neon yellows and greens. This encapsulates the juxtapose nature of Fatu Feu'u's work in which he bridges traditional Samoan art and New Zealand modernism. The frangipani flower, though not native to Samoa, is closely associated with the country. In this painting it functions as an instant visual symbol, and a metaphor for Feu'u's unification of two visual cultures. As with all of his work, Samoan patterns, devices and techniques are not re-imagined through the filter of European-inspired Expressionism, but are left in their native form, wholly intact. By 1993, when Feu'u completed this painting, he was gaining recognition for his contribution to New Zealand painting. For decades, he had been working in a relatively insular art world in which Pacific art was under-represented and over-appropriated. In spite of this, he had gained a degree of institutional recognition, partly helped by his association with Fomison, Clairmont and Maddox (the stylistic similarities between these four painters are obvious). He was represented by RKS Galleries in Auckland along with Hanly, McCahon and Hotere. Equation of Authority can be seen as a rightful assertion of Feu'u's position in New Zealand's modern art narrative. Nearly three decades later, the title reminds us of the need to go further in recognising and promoting Pacific art in New Zealand. It speaks to a levelling of cultural and artistic duality, in which we are compelled to view cultural memory and consciousness through a bicultural lens.