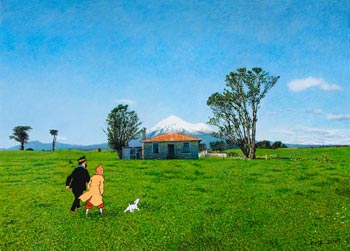 This latest work is one of a series of Tintin paintings by New Plymouth based artist, Graham Kirk. The popular comic strip The Adventures Tintin, was created by Belgian cartoonist Georges Remi under the pen name Hergé. This series was one of the most popular European comics of the 20th century and continues to be published in more than 70 languages and adapted for radio, television, theatre and film. Graham Kirk has been a fan of TinTin's since the cartoon first appeared in New Zealand publications around 1960. In this latest work, Tintin, his faithful dog Snowy and Captain Haddock stride purposely across green New Zealand fields towards a derelict house at the foot of Mount Taranaki.

Wonderwoman and the Kereru