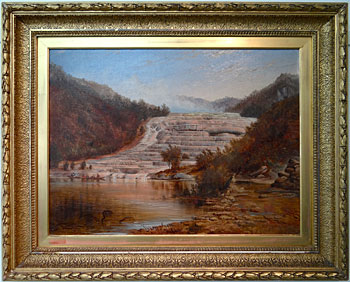 Inscription on label affxied verso reads: The Pink Terrace on Lake Rotomahana N.Z. Visited by me on January 23rd 1886. The Terraces were destroyed by the eruption of Mount Tarawera a big earthquake on June 10th 1886. This picture bought by me from the artist (C. Blomfield) himself in Auckland on April 24th 1886. F. Egbert Holland.

The following excerpts are from the diary of F Egbert Holland:

Walked a little in the morning but found it too hot - made inquiries about special buggies and coaches to Taupo and Napier. Started in a private buggy for Wairoa, 11 miles; - undulating fern covered country at first, then bush, then we came out upon the Blue Lake the road passing close to it first and then close to the Green Lake - a narrow fern covered ridge separates the two, and the Blue Lake is 60 feet higher than the Green; soon after we reached Wairoa: - an extremely pretty drive.

Started at 7.45 to visit the Terraces; first we walked down to Lake Tarawera about a quarter of an hour; there we took a boat with four rowers, and Sophie for our guide, a Maori, and rowed across the lake to the end of the Te Ariki arm, about an eight mile row. Then we took off our boots and stockings and walked in slippers about 1 mile to the White Terraces. The first view of it is very striking. We walked to the top, a great part of the way being through the water, on account of which we had taken off our boots, as the water is supposed to destroy leather. Note: The remaining entry for January 23 extends over four pages. A photocopy of the complete entry is available to view.

From the top the view looking down is very striking - the water in the pools is a bright milky light blue (opal coloured in places) and there is a certain amount of green growing on one of the terraces, so that the contrasts of colour are very great, and the foreground is such a striking contrast to the ordinary though pretty scenery beyond, which is fern covered hills.

The Strutts came to lunch. In the afternoon B and I went to Charles Bloomfield's (sic) studio to see his pictures of the Terraces, and did a little shopping on the way back

April 22nd 1886 I went to Mr Bloomfield's (sic) to try and see him about buying two pictures of the terraces, as he had been out the day before, he was out again. Then we went for a drive through the Ruimera (sic) Valley to the Three Kings which were three isolated hills; we went into the mouth of the cave at Three Kings, we had a good view of the Manuka (sic) harbour which is the harbour opening on to the West Coast. I tried again to see Mr Bloomfield (sic) but he was out.

April 24 1886 We paid up our passeges at the Union Office in the morning, for San Francisco. Then we drove up Mt Eden, and had a splendid view all round; it is an extinct volcano with a beautifully formed crater at the top, grown over with grass. We passed the Governor of New Zealand, Sir William Jervois, on the way down. In the afternoon I went again to Mr Bloomfield's (sic) and found him at home, and bought two pictures, one of the white and one of the pink terrace, price £8.10.0 each, and he undertook to send them home.

The pictures referred to in the diary entry have remained in the same family collection since 1886. They are now on the market for the first time and offered in original gilt frames.

Charles Blomfield has long been recognised as the most popular early New Zealand painter of the Pink and White Terraces. Both these paintings are exceedingly fine works and pre-date the Tarawera eruption. Blomfiled first saw the Terraces during a camping trip in December 1875, and commented that they were exceedingly beautiful and graceful. Returning in 1885 he spent six weeks documenting the Terraces and surrounding landscape in a series of oil paintings. It was reported that by September 1885 orders for paintings had been received and completed from throughout Europe, America, Australia and other places. Early on the morning of 10 June 1886, Mount Tarawera erupted, burying the terraces. Blomfield was heartbroken and decided to see the devastation for himself. He returned to the area in October and painted several scenes of the terrible destruction. A world away, fourteen of his Rotomahana paintings were on display in South Kensington, London at the Colonial and Indian Exhibition. This major exhibition strengthening the bonds of the the British Empire was opened by Queen Victoria a received 5.5 million visitors.

Blomfield realised that the paintings he had made of the Terraces were a valuable record, and declined to sell them. He went on to paint and sell scale copies of these works. The prices soon trebled in value.

After 1886 Blomfield continued to travel throughout New Zealand painting pictures of mountains, rivers, lakes and cloud effects, but his greatest love remained the native bush, of which he wrote enthusiastically in his diary. Charles Blomfield died in Auckland in 1926.

The Terraces were thought to be buried by the Tarawera eruption of June 1886. Separated by nearly a kilometre, the Pink Terraces were about two thirds of the way down the lake, sheltered from the harsh sun on the western shores, facing south-east. Their pink appearance was largely due to less exposure to sunlight, and therefore less bleaching. Tourists and locals bathed in the luke warm water on the lower level of the Pink Terraces. In February 2011 scientists using robotic underwater vehicles announced that they had found what they believe to be part of the Pink Terrace 60 metres under water in Lake Rotomahana.

The White Terraces were at the north end of Lake Rotomahana and faced away from the lake at the entrance to the Kaiwaka Stream. They descended to the lake edge forty metres below. The additional sunlight received from facing north created their bleached white appearance. The White Terrace was the larger of the two formation, covering in excess of three hectares.

To view the other lot of this pair, please download this PDF (64KB)