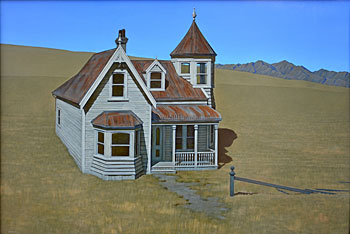 Brent Wong burst onto the local art scene in the early 1970s as a young man with original imagery, an impressive technical mastery and a refreshingly surrealist take on New Zealand land and sky. "Untitled 1974" is an important bridge between the artist's early influences and later directions; and it reveals the artist moving, as we know through hindsight, from architectural claustrophobia to hopeful light and energy.

However, this painting is not yet the artist's future; and the artist still to free himself from the psychological confinement of the early years. He is casting about for help though, and "Untitled" shows where he was looking, with the strongest influence in the painting coming from the work of American artist Andrew Wyeth. It is especially reminiscent of Wyeth's painting "Christina's World" of 1948 with its well-known figure of a girl seated or crawling in a dry grassy paddock and looking back into the landscape towards her distant farmhouse and its few outbuildings. The Christina of Wyeth's painting, in real life Anna Christina Olson (1893-1968) who had a degenerative muscular disorder, is shown relatively unfettered by her illness, at home in her wider world. In Wong's painting the empty, blank-windowed house occupies the place of the girl in the foreground; but unlike the girl, it sits there entirely alone. Wong, perhaps seeing the world through the lens of his own confining illness, turns the rural scene into one of isolation and entrapment. Under Wong's hand, we understand that the open space of landscape may be as much threat as solace. It is precisely this ability to create an unresolved tension between comfort and menace that distinguishes Wong from his peers.

Looking at the building in "Untitled", it is so ubiquitous of New Zealand's rural communities and city neighbourhoods; it could have come from any number of small towns known by the Otaki-born artist. Equally it could be a faithful copy from 1970s Vivien Street near his Wellington flat. The landscape also shares a familiar generality. Painted in the studio from memory it is classic Wong: dry as a bone; spare and emptied of people; and highly suggestive of those wide open spaces in New Zealand where isolation can be thrilling and heart-breaking in equal measure. We don't need to know where this is; Wong's finesse is to show us a place we all already know and then imbue it with mystery.