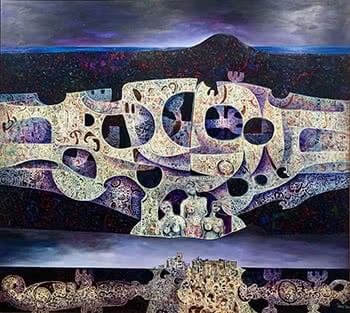 Another inscription verso reads:
This painting is supplied with a black light to fluorecse [sic] the painting in darkness. To see this painting to full advantage / A lighting dimmer (-Variac) should be used on ordinary light in the room. This will give an infinite variety of florescent effects as the lights dim and the black light becomes effective.

Taught by Elam graduate Selwyn Wilson at Northland College in Kaikohe (where, in 1960, his last year, he was made Dux), Buck Nin was encouraged to go to art school in Auckland. But the culture of that art school was not to his liking, and he left after two years to enrol at the School of Fine Arts at the University of Canterbury. There he studied with expressionist painter Rudi Gopas (1913-1983) and was encouraged to explore his Māori whakapapa, developing a painting style which incorporated the koru and other patterns derived from kowhaiwhai or customary rafter paintings, carving and weaving.

Convincing others of the vitality of the new Māori art which he and his peers were producing in the context of University art schools, he convinced the Canterbury Museum to mount an exhibition of young practitioners in 1966. Called New Zealand Māori Culture and the Contemporary Scene this hugely important exhibition toured first to Wellington then on to Australia, Western Samoa, Singapore, Malaysia, Hong Kong and Japan.

Equally proud of his Ngāti Raukawa, Ngāti Toa and Chinese market-gardening heritage, Buck Nin was one of the founding members of the Māori Artists and Writers Association in 1973, and a renowned educationalist. After art school he returned to Northland to teach at Bay of Islands College in 1967 before moving to the Mormon Church College of New Zealand in Hamilton, where he worked for the next 20 years.

Celebrating the importance of the marae as the cornerstone of a sense of belonging, this painting features interlacing forms in the sky denoting a spiritual connection between Māori and their land as tangata whenua. Delicately highlighted with white paint, these lacy structures are designed to fluoresce under black light just like white clothing at a 1970s disco. Ever energetic in his pursuit of excellence and innovation, Buck Nin completed a PhD in Administration Arts and Management in 1981 and founded Te Wananga o Aotearoa with Rongo Wetere in 1984, participating in over one hundred art exhibitions before his untimely death at the age of 54