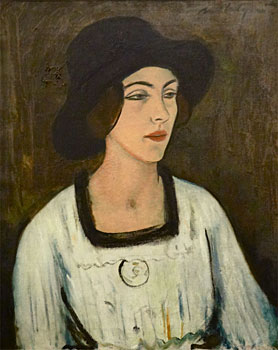 Collection of the Artist's relatives

The following quotations are from a blog written by Ron Brownson about Phyllis Constance Cavendish and Raymond McIntyre. http://aucklandartgallery.blogspot.co.nz/2011/09/raymond-mcintyre-and-phyllis-constance.html

'A renowned collaboration between a New Zealand artist and model occurred in London's Cheyne Walk studio of Raymond McIntyre between 1912 and 1914. Born in Christchurch in 1879, he was one Petrus van der Velden's most talented pupils. McIntyre felt Canterbury constricted his vocation. Arriving in England during February 1909, he never returned. He soon became a pupil of London painters William Nicholson, George Lambert and Walter Richard Sickert.

McIntyre met 22-year actor Phyllis Constance Cavendish and she became the subject for over a dozen portraits in oil and watercolour. Writing to his father on 4/5/6 December 1912, he states, "I did the best work I have ever done so far, from her. I like to go outside the usual run of professional models, of which there are hundreds and hundreds in London - and get people of more normal type and who do not live in the atmosphere of studios all the time. It is more interesting to have a breath of the outside world come along with different interests and information to impart. These stage folk who I have had are very helpful to me in that way'