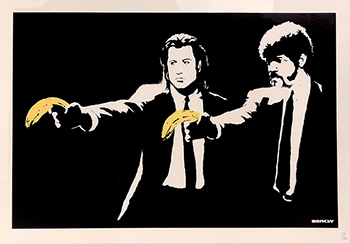 Banksy's Pulp Fiction depicts a famous scene from Quentin Tarantino's 1994 blockbuster film Pulp Fiction. The work depicts the two main characters played by actors Samuel L. Jackson and John Travolta. Rendered in white stencilled forms on a black background, Banksy presents the protagonists Vincent and Jules, side-by-side and aiming their firearms in synchronisation. In a humorous twist, their pistols have been replaced by bright yellow bananas, the only touch of colour in the otherwise monochrome composition.

Pulp Fiction first appeared in 2002 as a stencilled composition near Old Street tube station, London. It was visible until 2007 when Transport for London painted over the wall, later estimated at £300,000, on the grounds that the work lent an atmosphere of social decay and neglect in the capital. When the mural was covered, a local street artist sprayed COME BACK in its place, addressed to Banksy. Banksy then re-tagged his original Pulp Fiction in exactly the same place, but this time the characters were holding real pistols and wearing banana costumes instead.

In January 2007, graffiti artist Ozone wrote over the new piece with the words If it's better next time I'll leave it. Shortly afterwards, the 19-year-old artist and his close friend, Wants, were both hit and killed by an underground train in Barking, East London. Banksy then created another piece over his original Pulp Fiction mural in tribute to the two young graffiti artists. This work depicted an angel wearing a bulletproof vest and holding a skull in his right hand. Banksy posted a note on his website . . . When we lost Ozone we lost a fearless graffiti writer and as it turns out a pretty perceptive art critic. Ozone - Rest in Peace.

The tribute mural was quickly referred to as Ozone's Angel. Subsequently, Banksy's original Pulp Fiction mural also became immediately popular, and was mass-reproduced on commercial merchandise. Pulp Fiction was released in 2004 as an edition of 150 signed and 600 unsigned prints.