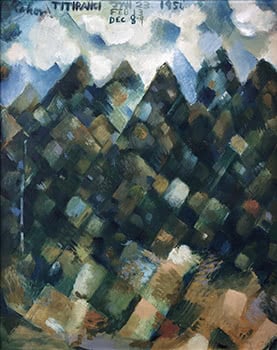 Moving to Auckland to work at the Auckland Art Gallery in the winter of 1953, Colin McCahon settled his family in Titirangi. After the denuded pastures of the Canterbury plains where he had been living, the towering kauri trees that populated the lush garden of his property in French Bay were a revelation to this South Islander, and they began to feature prominently in his work. Just as Montagne Sainte- Victoire overlooking Aix-en-Provence became a recurrent motif in the late paintings of French artist Paul Cézanne, so the Titirangi bush become the key theme for McCahon in the mid-1950s. He produced a series of works based on the kauri trees, his house and French Bay itself, exploring different angles, lighting and compositions, in which he created a harmony of contrasts.

His motivation was to explore the nature of perception as well as to study his surroundings. A contemporary of McCahon's from Christchurch, Harry Scott (1918-1960), moved to Titirangi in 1956, taking up a position as the head of the new Psychology Department at Auckland University College in 1957. Scott's experiences of imprisonment as a conscientious objector during World War II led to post-war PhD research at McGill in Montreal on sensory deprivation. He discussed with McCahon how the eye and mind respond when seeing light after a long period of darkness, and inspired the artist to experiment with his own vision. McCahon would wake at dawn and dash outside to gaze at the light coming through the trees, and then try and paint what he saw later, with sunshine from the summer sky and clouds above dematerialising the forms of the vegetation into patches of colour. He restricted his palette to complements of blue, green and muted orange, setting up a syncopated rhythm across vertically- oriented compositions. Brushwork flattens recession, distancing his painting from representation.

With specific days inscribed on this work, our attention is drawn to the time of year - mid, late and early summer. This contrasts with a similar Titirangi painting, formerly owned by Dunedin poet and philanthropist Charles Brasch (1909-1973), which was painted in winter and is inscribed August, September 1. This shows that McCahon was interested in exploring how the light through the trees changed with the different seasons, (although not as tied to depicting specific times of day as Impressionists had been in the previous century). This is a key work in McCahon's development as modernist painter, showing the path he took to abstraction which would dominate his practice in later decades. LINDA TYLER